Sock Missiles and the Boring Game 
I recently started teaching Sunday School for the upper-elementary age kids. That age group is totally up my alley, plus these kids are so much fun!  And speaking of fun, this morning as part of our lesson, they got to hurl balled-up socks as I ran through the room trying to dodge them.  (Temptations being thrown, you see.)

When they dawdled through copying a list of the first few books of the Old Testament, I casually mentioned that they might want to pick up the pace, folks, because in our activity afterward they were going to get to throw things at me.

Sample reaction of elementary-age girl:  "Really?  Because at my school if we threw something at the teacher we'd probably get sent to detention ..."

Sample reaction of elementary-age boy:  "Awesome!  How hard can we throw?"

Let's just say I was thankful our classroom is on a different floor than the others, as I dashed and squealed repeatedly through the room being pelted with fleece missiles thrown by cheering children with surprisingly accurate aim.

Then I held up a bedsheet, telling the kids that it represented the Word of God.  (One girl:  "How is an old sheet supposed to be the Word of God?"  Me:  "Um ... maybe you didn't see the clothespin-fastened sign here that says 'Word of God'.")  The sheet deftly deflected the socks as I placed it between me and the barrage of ammunition on the way across the room.

I wondered if the lesson would really land.  But later, all the kids wanted a turn to be the temptation-dodger and they were each getting mercilessly nailed with socks until one smart 4th-grader grabbed the sheet and threw it over her head as we were counting down.

I may or may not have jumped up and down at that point and yelled, "EXACTLY!"

(We were all a little wound up.)

Meanwhile, Mark was in charge of the younger children downstairs.  One little boy was in a mischievous mood and kept requesting to do things that were "boring".  ("I want to sing a boring song."  "I want to read a boring story."  You get the picture.)  Well, Mark can be mischievous too, and finally asked, "Do you want to play a boring game?"  Surprised, the boy answered yes, so Mark sat a chair facing the wall and told him that the boring game was played by sitting and staring at the wall without moving.

Well, not to be left out of anything called a game, the other children protested that they weren't getting to play too.  So Mark let them all play the "boring game".  This is the picture he posted to our church's Facebook page this afternoon. 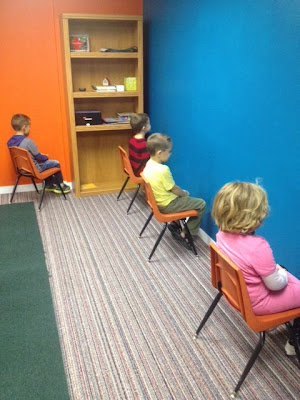 The kids are excited to play the boring game again next week.

So, that would be Mark for the win.