On Trust, Tricks and Attack Trains 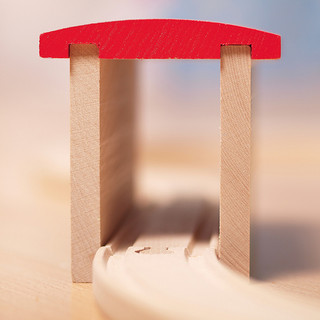 To begin with, I’m probably oversensitive about this.

Chopping vegetables for dinner one night last week, I heard the kids playing at the train table.  Before long, Maya’s words caught my attention, coaxing as she gave voice to a blue engine beckoning one of the trains in Noah’s hand.

“It’s okaaaaaay.  Come over heeeeere.  You can stand right here by me.  It will be fun!  Don’t be scared.”

Nervously, Noah decided to trust and to move his character closer.  But then …

Noah was started and confused.  This isn’t the way they usually play, and I called out immediately, not even thinking.

“Um …”  I was trying to figure out my own reaction.

“Well … I don’t really like tricking games, okay?  Can you not play ‘attack train’ unless Noah understands what you’re playing?”

I stumbled through an answer, but didn’t really have the words.  Mulling it over since then, though, I know how I should have responded …

Why don’t I like those games?  That’s a good question, honey.  And I’ll try my best to explain.  You see, as much as I love to laugh and joke, I don't like trying to fool people.  I've just never thought it was fun or funny.

When I was a kid like you, there was a show on sometimes called Bloopers and Practical Jokes, hosted by Dick Clark and Ed McMahon.  (They were before your time, sweetie.  In fact, they were probably before my time, so it’s okay that you don’t know who they are.)  Most of the show was about little mistakes actors made during rehearsals for TV shows, or funny things that happened on the news.  Those, I loved.  But there were also parts where they’d show a big prank being pulled on someone.  And those gave me a tummy ache.  I’d get nervous and sweaty and couldn't figure out why everyone seemed to enjoy watching something that was so uncomfortable to me.

I'm not really talking about the kind of shenanigans that involve doing something silly to a friend's yard or car.  (When you get a little older, I'll tell you about some of the things I did in high school.  Maybe.)  That stuff - although it can walk a thin line between light-hearted and mean - doesn't usually involve trickery.

Remember how I’ve never liked April Fools Day?  How I’ve told you that it makes me feel on edge all day long?  Have you noticed that sometimes other grown-ups will joke with their kids and say things straight-faced like, “Oh, we ran out of dessert … too bad the kids don’t get any.” and it sort of confuses you and Noah because Daddy and I don’t really joke that way with you?  Or the YouTube videos people talk about where someone tells their kids that Christmas is cancelled or that their birthday present is a tooth cleaning?  You might find those things really funny, Maya, and that’s okay!  A lot of people do.   I don’t know why I struggle with that sort of teasing so much.  Maybe you think your mom is weird this way, and I’m all right with that.

I guess it just boils down to this:  I want you to be able to depend on what I say.  To take me at my word and to know with confidence that the words I speak into your life are my very best attempt at the truth.  That my yes would be yes and my no would be no, and that it’s unquestioningly safe to trust my answers to your questions.  Yes, I’ll mess up many times and disappoint you and have to apologize, but I want you to be sure – even in those times – that my intentions are always to speak well and true to you.

Maybe that’s why you’ve always known Santa Claus, the Tooth Fairy, and the Easter Bunny as fun stories that we joyfully tell during special times, but as simply that – fun stories.  Why I’ve never used the “Goodbye, Maya – I’m leaving!” tactic to get you to listen and come when you’re having trouble following me out the door.  (No - parents who do things differently aren't doing anything wrong.  Not at all.  And yes, of course their kids trust them completely.  I probably just need to loosen up.)

I want to raise you with discernment.  We've talked about how people make wrong choices, and how not everyone tells the truth, and we've worked through stranger safety.  I want you to enter adulthood with a healthy balance of an open heart and wise discretion.  (And goodness knows, I want you to have a fantastic sense of humor!)  I don’t want you to blindly believe that everyone you meet deserves your full confidence.  But I want you to believe that – to know that - about Daddy and me.

And I want you and your brother to know that about each other.  Sure, you squabble and slam doors and know how to push just the right buttons, but you’re also best friends.  And you’re joined for life.  Sure, as you grow older there will be plenty of times that you’ll be at odds and may not be particularly close as teenagers.  But by adulthood again you’ll thank God for each other just as you do at bedtime right now.  My hope is that there will always be trust between you.

Maybe someday, when you’re all grown up, we’ll be sitting around the table and your own little ones will be playing nearby.  We’ll reminisce about your childhood, and you’ll roll your eyes and laugh affectionately about how “Mom never let us trick each other.”  And maybe you’ll think – and probably be right – that it was all a little silly, or that I was being too sensitive about the whole thing.

I just wanted you to sort of understand why.  Even if I don’t fully understand it myself.

I'm blogging every day this month with all of these brilliant people.  It's my ...