Texting while walking: A cautionary tale

This was our hotel room as the Blissdom conference this weekend. 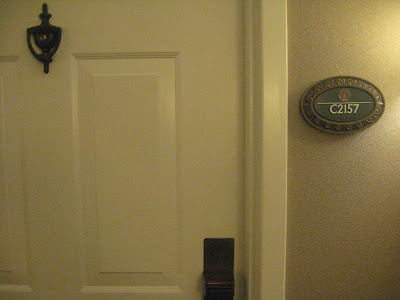 This? Was not our room. 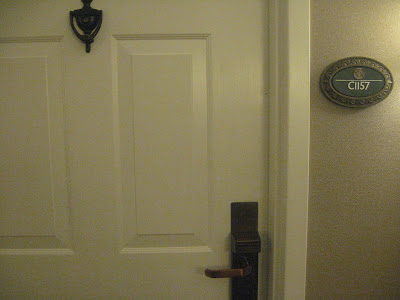 These pieces of information are important to the story I'm about to tell.

On Friday afternoon, I wandered through the hills and jungles of the Gaylord Opryland, headed for a little down time. Inspired and a little overwhelmed by the day's sessions, my mind was zeroed in on my phone, feet on autopilot as I sent some texts.

Stepping onto the elevator, I barely glanced up to punch the Level 2 button. The doors opened, someone got on and I walked off, rounded the appropriate corners in the hallway, and scanned the approaching room signs for a 157 suffix. Arriving at the door, I hit Send on a message to Mark and pulled out my key card.

The lock beeped its welcome as I slid the card confidently in and back out, lifting my heavy bags and walking in to the freshly cleaned room. This was my mental dialogue in the next few seconds:

"Oh, how sweet! The housekeeper lined up my shoes under the bed."

"Hmm...that's not my suitcase either."

I'm certain that every person reading this story is currently several steps ahead of where I was in that moment. Because rather than realizing that I was in the WRONG BLASTED ROOM, my mental haze sent me in a different direction:

"Oh my gosh...someone took our stuff! And replaced it with someone else's stuff! Why would they...where did they...what do I..."

Scrambling to the door, I yanked it back open to confirm the yep - wrong floor situation, and leaped back into the hallway, praying that the elderly woman strolling by was not the occupant of the room I'd just been standing in. Because what would I say? "Sorry! My key worked! I really don't walk around trying it in all the rooms! Nice shoes!"

Here are my takeaways from this situation:

1. I have no business attempting to multitask.

2. The lovely folks at the Gaylord Opryland might want to tweak their security protocol. Because hotel guests cannot apparently be depended upon to pay attention to pesky details like floors and full room numbers. Sometimes they stumble around like idiots, trying their keys every which where and walking right in.

3. Thank you God that I did not walk into the middle of someone's nap. Or shower. Or...other activity. Awkward.

4. Also, thank you God for sane friends like Megan, who - when I dragged her down to the first floor with me to collect pictorial evidence for this post, and had a sudden urge to take a picture of the inside of a room that wasn't mine - gently suggested no, maybe not.

Ironically, as I packed to leave Nashville yesterday morning, a news story on Channel 5 caught my attention. The subject? A recent study on the dangers of texting and walking.

“We were surprised to find that talking and texting on a cell phone were so disruptive to one’s gait and memory recall of the target location,” says Eric M. Lamberg, PT, EdD, co-author of the study and Clinical Associate Professor, Department of Physical Therapy, School of Health Technology and Management, Stony Brook University.

Oh Eric, I'm not surprised at all. But I do feel very validated.
Posted by Laura at 8:35 AM No comments: 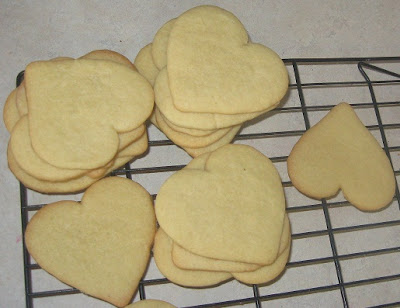 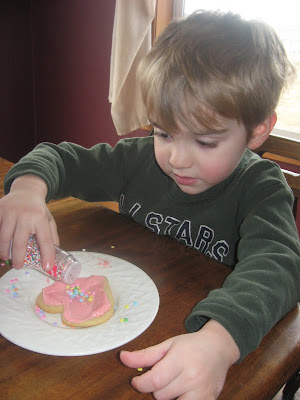 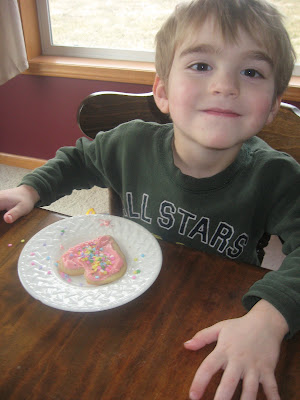 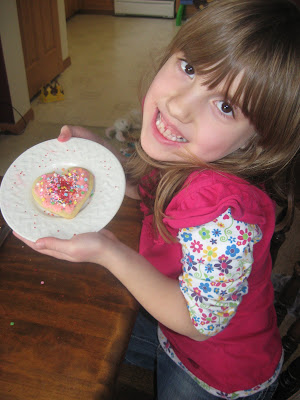 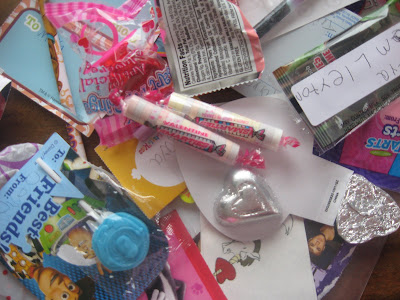 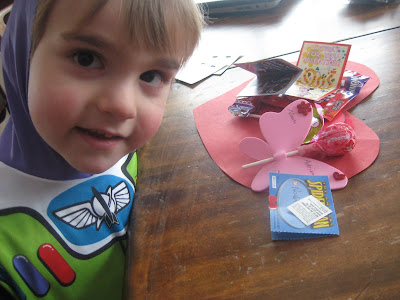 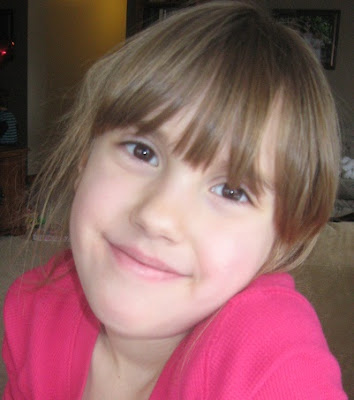 We're thinking about all of the people we love today! (The fact that Buzz Lightyear showed up is just a bonus.)
Posted by Laura at 3:52 PM No comments: 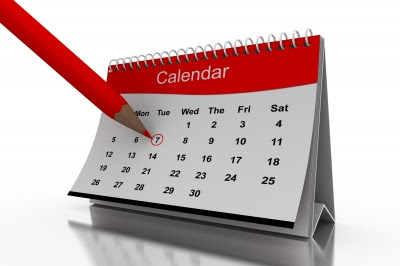 1. The Grammys are on tomorrow night, and I will be watching this year because if Adele does not sweep her categories, the world has gone mad. I'm a fan of Mumford & Sons, and I'll hum along to Bruno Mars, but I mean come on...


2. Megan and I hit "Send" on our (we think!) FINAL DRAFT of the Spirit-Led Parenting manuscript, placing it the expert hands of our editor, Jonathan. He's working on cover designs, and we're working on next steps. So I'm looking anxiously forward to whatever comes with the next month-and-a-half until the expected release. Wow.


3. Two weeks from now, I'll be in Nashville with Megan and a whole bunch of other amazing women I can't wait to meet. Blissdom also gave me an excuse for a much-needed shopping trip with my friend, Nichole, who handed me things to try on and told me what to buy. It also gave her the opportunity to say things like, "You don't own BLACK FLATS? SERIOUSLY??" and talk me through issues regarding bustlines on cocktail dresses. "Where did THOSE come from?" What I'm saying is that I'm fairly certain she earned every cent of the lunch I bought her, and then some. And I now own black flats.


4. And in the very short term, I'm looking quite forward to enjoying a piece of this leftover cake I made for a family birthday gathering yesterday. Mark and I have a traditional 10:00 snack each late-evening, and I can't wait for this one!


Hope your week ahead holds all sorts of anticipated and unexpected delights! 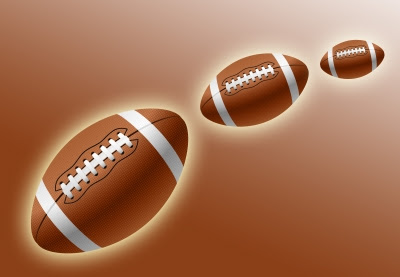 I should maybe care a little bit about the Super Bowl this year, just because it's close by (ish)and coverage is everywhere and it might be sort of fun to jump on the anticipatory bandwagon. But quite honestly, my sports-related anticipation is already entirely claimed by this summer's Olympic games (SIX MONTHS AWAY), and I can't be bothered with any other athletic contest. My apologies in advance to March Madness and the Triple Crown. I blame the Today Show, with its insistence on playing the Olympic theme song from time to time, making me all misty-eyed and pathetic. Oh, Matt Lauer...you sure know how to stir my heart.

That sounded weird, but I'm leaving it.

Anyway, even though I don't care about Sunday's game, we are going to a Super Bowl party. Or, our small group is meeting on it's usual night and we're going to have the game on while we talk and pay half-attention to the commercials and Madonna and eat copious amounts of snack foods. In other words, hooray!

We've been throwing around Facebook messages about what food items we're bringing, because it's important not to have too much overlap, and also because I just really want to know. I'm low-key like that. (We decided initially that we'd each bring a snack (singular) and a drink. Which has now developed into each of us bringing at least three different types of finger foods. I love us.) So my friend Ryann sends out a message this afternoon saying, "I'm bringing Hanky Pankies..." followed by a list of other stuff that I didn't pay any attention to because what in the world are Hanky Pankies?

To find out, I made the unfortunate choice to consult the internet. Yes that's right. Suffice it to say, I shrieked aloud, then hit the Back button on my browser to return to Facebook land and tell Ryann that I need to immediately know what Hanky Pankies are and also just as an FYI don't Google it.

So this recipe apparently involves meats and Velveeta, which are two of the main Super Bowl food groups, so now I know and all is well.

My contributions to the gathering will include my favorite soft pretzel sticks and a version of cookies from my eclectic collection of chocolate-chip recipes. In past years, I've almost always made my beloved Southwest Egg Rolls, but since I've made them for both of my kids' birthday parties in the last two months, I'm done for awhile. Although they are life-changing, so I'm including that recipe link here as well.

May all of your Super Bowl gatherings be delightful! And may one of the two teams involved win.

(Mix all and let stand until dissolved)

Knead 7-8 minutes. Place in oiled bowl, cover, and let rise in warm place for one hour, or until doubled.

Cream butter and sugars until fluffy. Beat in eggs and vanilla. In separate bowl, mix flour, baking soda, and pudding mix. Stir into butter/sugar mixture until combined. Fold in chocolate chips. Bake at 375 for 11-13 minutes.

Note: It is imperative that you try the Avocado Ranch dip recipe included with the egg roll one. Just...trust me.

I've also made these by rolling them up and putting them on a baking sheet coated with cooking spray, brushing them with oil, and baking them instead of frying. They're good. But for as infrequently as I normally make them, I usually splurge and fry them in canola oil.

Email ThisBlogThis!Share to TwitterShare to FacebookShare to Pinterest
Labels: food 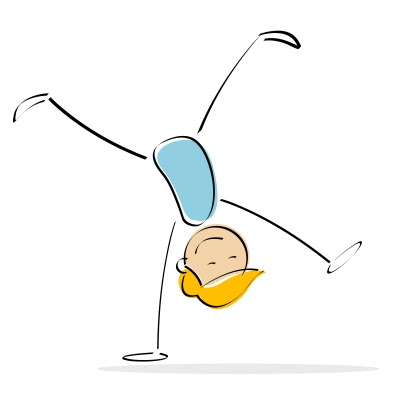 So, WHAT is going on with this book by now? Well…a LOT!

On Tuesday, in a fantastic conference call with Jonathan, our editor/mentor at Civitas Press, Megan and I heard two amazing words:

Which means: the writing is pretty much done. (EEEK!) Another read-through for fine-tuning, but basically our book is finished! It is homestretch time. We are astonished, thankful, giddy, and so very thrilled with the way it has come together. This has been hard, stretching, rewarding, life-changing work. Through laughter and tears and much prayer, as well as with Jonathan’s encouragement to look deeper and work harder, we can truly say that we poured everything we could into this project. And that is an incredibly good feeling.

We have a final title:

Spirit-Led Parenting: From Fear to Freedom in Baby’s First Year

There is work being done on the book cover, and we will very shortly begin the task of gathering endorsements and developing promotional plans. It’s a crazy new world for us, but we are excited and nervous and just feeling ridiculously blessed by the journey so far.

Thank you for standing with us, holding our hands, and cheering us on. We are grateful beyond words, and cannot wait to share more with you as the process moves forward!