Thank you so much for your patience and understanding as chatter has turned to crickets around here lately with a major lack of posting. We are just about 2 1/2 weeks away from the deadline for our manuscript draft, so most all writing time and energy has been directed that way these days.

Megan is back to share today some valuable information about milk production as we wind down our series on infant feeding. Very soon, we'll jump into another topic. Will it be sleep? Marriage? Sex? Your guess is as good as ours at this point, but we are excited to continue these discussions in the coming months!
* * * 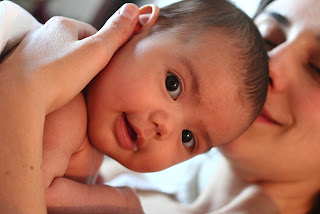 
As you might remember, we've been talking through some issues on infant feeding in our Spirit-Led Parenting series. One of the central issues that comes up frequently in discussions about infant feeding is whether or not babies should be fed on a schedule. Today, I want to talk about some concerns for breastfeeding mothers when it comes to scheduling.

I have to clarify from the very beginning that I breastfed Dacey on a schedule starting at about four weeks or so. This was during the time I was trying very hard to follow both Babywise and The Baby Whisperer. Dacey was a big (!) newborn - she arrived weighing nearly ten pounds and she continued to be completely off the top of the charts in weight and length throughout her first year. I continued to nurse Dacey on a schedule throughout her first year, even after I made the philosophical mind-set change from Babywise to a more AP-centered approach. She nursed until she was newly two and I got pregnant with AJ and lost my milk supply.

The concern comes, however, when we begin to notice a trend in moms who have breastfed on a schedule from birth and then begin to have supply issues after baby hits the four month mark. To understand why this happens, we need to look at the science of breastfeeding and the system God designed that controls how our breasts make milk.

If you have time, reading this article at Kellymom explains some of the most important information we can find on milk production. Here is what I want to discuss in terms of scheduled feeding:

Milk production doesn’t start out as a supply and demand process. During pregnancy and the first few days postpartum, milk supply is hormonally driven – this is called the endocrine control system. Essentially, as long as the proper hormones are in place, mom will start making colostrum about halfway through pregnancy (Lactogenesis I) and her milk will increase in volume (Lactogenesis II) around 30-40 hours after birth.


Under normal circumstances, a woman's body creates milk under the direction of the endocrine control system in the first three months. Something extremely important happens within those first few weeks.

Now, I realize that's a lot of science-y stuff. I've bolded what is most important for us to understand. In the first few weeks after giving birth, it is frequent nursing that actually puts a system in place to give mother and child the best possible start of long-lasting milk production. It is our belief that this is why newborns seem to want to nurse around the clock - God designed babies this way to stimulate milk production not just in those early weeks, but the system of production that will guide the milk supply for the months to come.

So, let's go back to the hormonal systems that control milk production. We know the endocrine system controls milk production for the first three months or so. What happens after that point? From three or four months onward, it is the autocrine system that governs milk supply.

Consider this from "Examining the Evidence for Cue Feeding" by Lisa Marasco, BA, IBCLC and Jan Barger, MA, RN, IBCLC

Endocrine control seems to be primary for approximately the first three months or so, until prolactin levels diminish. It is now believed, partly due again to Dr. Hartmann's work, that another process referred to as autocrine (local) control takes over at about this time. Under the theory of autocrine control, the body continues milk production at a more local level that has been set during the early period. What appears to affect successful long term lactation is the proper development of adequate prolactin receptors during the endocrine control period, which in turn appears to be correlated with frequency of feedings: the more frequent the feeds, the greater the stimulation of receptor development.


So when the body moves from endocrine to autocrine control of milk production at about the three or four month mark, there may be a drop-off in supply if prolactin receptors were not adequately developed in the earliest weeks of nursing.

Now, again, this will not affect every nursing mother. For women like me who had overabundant milk supply issues, the four month mark was a wonderful relief. I could finally stop wearing (and soaking through) nursing pads around the clock and I didn't have to swaddle myself with burp rags to catch the copious amounts of milk that were just everywhere each time I nursed one of my babies. For women whose bodies will have abundant milk supply no matter what approach to feeding is taken, this switch from endocrine to autocrine control will probably go unnoticed.

However, for some women who by nature do not have an abundant milk supply, there will be a noticeable difference in milk production, and some women will completely lose their supply between four-to-six months.

So what is the take-away here?

1) If you want to breastfeed, please don't view a new baby who wants to nurse all the time as an indication that you have milk supply issues. On the contrary, your baby is doing exactly what God designed for him to do: helping you build your milk supply for the present time and the months to come!

2) If you think that scheduled feedings would work best for your temperament and for your family's unique circumstances and if you would like to be able to breastfeed throughout the first year, please consider not implementing scheduled feedings until after the first month. I found that with Aliza Joy, my baby who I fed on demand from birth, she very naturally fell into a predicable feeding schedule at about two months or so. I didn't have to watch the clock but I did notice that around that time she wanted to nurse every few hours instead of throughout the day. I mention that because if the idea of demand-feeding is not something that appeals to you, you might find that idea of not implementing a schedule from the start to be unsettling. Babies often find their way to predictable routines, and it is a lot easier to stretch time between feedings for a baby who is a couple of months old to move them toward a schedule.

Several books that encourage scheduled feeding advise a two-and-a-half to three hour feeding schedule from birth through the first eight weeks. Given what we know about the science of milk production, this is not developmentally appropriate and may set women up for, at best, disappointing breastfeeding experiences and, at works, failure to thrive in babies that occurs in the four to seven month range when mother's milk supply begins to drop but early introduction of solids may mask the issue.

We would love to hear your thoughts today! Were you aware of the hormonal changes that govern milk supply? What do you think about breastfeeding and schedules? Feel free to tell us your story in the comments!
Posted by Laura at 10:04 AM

Email ThisBlogThis!Share to TwitterShare to FacebookShare to Pinterest
Labels: the book