I'm told that he fell with style.

The Toy Story obsession in our household has been going strong for quite awhile now. Noah is Buzz Lightyear about 95% of the time - activating his wings before leaping off of the furniture, checking his laser button for full function, and repeatedly assuring the rest of the family that he comes in peace.

In the months leading up to our Disney vacation last May, he developed a sixth sense for which of his playmates owned Buzz Lightyear action figures and how to track them down with great speed. Five minutes after walking into any such home, Noah would emerge with Buzz in his hands, not releasing his hold on the toy until we left to go home. "Buzz Lightyear is my favorite!", he'd chirp over and over until it became a running joke for our friends to casually ask, "Hey Noah, which toy is your favorite?", so that he'd stop mid-flight to start the ode-to-Buzz monologue all over again.

So, while at the Magic Kingdom, we felt it might be time to let Noah realize the dream of owning his very own Buzz Lightyear. He held the box with great joy, and has played with Buzz every single day for the three months that we've been back home.

You can imagine then, the panic that set in when Noah called me into his room the other day and I found him peering over the side of the bed, holding Buzz in one hand and gazing at one very detached space ranger arm lying on the floor. 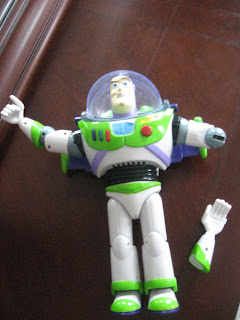 Keeping it casual, I asked what happened, and learned that Buzz had taken a tumble at the wrong angle. Noah was quite calm, and while I was pleasantly surprised at first by the mature way in which my three-year-old was processing the damage to his favorite toy ever, I soon realized that star command, we have a problem. See, my son is familiar enough with all things Toy Story to know that Buzz breaks his arm in the movie too. But NOT TO WORRY because the mutant toys in Sid-the-destructive-neighbor-boy's room just sort of pop it back in place in one of those inspirational "don't judge a book by its cover" moments.

The problem is that our home is lacking in mutant, living toys with mechanical skills, as well as in hardware that would enable humans to complete the arm repair. (It's just plain busted.) Noah has not caught on yet, and has been playing with one-armed Buzz while checking regularly on the left arm, which sits on our bookshelf waiting for a miracle in either infinity or beyond.

Or until that crafty band of disfigured toys shows up. Anybody have their number?
Posted by Laura at 7:00 AM

Email ThisBlogThis!Share to TwitterShare to FacebookShare to Pinterest
Labels: parenting